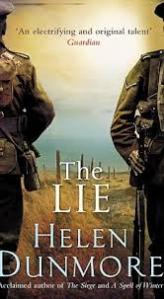 Genre: War, Historical Fiction
Narrative Style: First person narrative set in 1920 with flashbacks to the first world war.
Rating: 3/5
Publication: 2013
Format: Kindle
Synopsis: Daniel has survived the First World War and is now back in his hometown, homeless and without family. He is haunted by his experiences in the trenches and by the death of his best friend, Frederick as he tries to make a new life for himself.

I picked this to read because I enjoy reading about the First World War and because it had good reviews but I found that it paled compared to other fiction that I have read about this conflict. I found it neither as emotionally compelling as some (The Absolutist by John Boyne) or as interesting in terms of the themes treated here (Regeneration by Pat Barker, Birdsong by Sebastian Faulks).
The main reason for my discontent was that the plot seemed stretched, little more than a short story’s worth of content strained by its extension to a novel. Daniel is sympathetic and interesting but not a lot happens to him, even during his flashbacks so there is little to move the plot along.
Where Dunmore does succeed is in her descriptions – both of the Cornish coast and the life in the trenches. They are vivd and really give the reader a sense of Daniel’s isolation and horror. Also the descriptions of him re-working Mary Pascoe’s land are an interesting metaphor for his attempts at starting a new life whilst also constantly reminding him of the mud in the trenches.
I also liked the analysis of class and the differences between Daniel and his much richer friend, Frederick are apt and seem realistic. The differences between them become particularly apparent when they are both in the army but in completely different roles.
Unfortunately, this couldn’t make up for the lack of action and also the I found the ending unsatisfying and a little ridiculous.

roaming the library one book at a time