Genre: War, Historical Fiction
Narrative Style: First person narrative set in 1920 with flashbacks to the first world war.
Rating: 3/5
Publication: 2013
Format: Kindle
Synopsis: Daniel has survived the First World War and is now back in his hometown, homeless and without family. He is haunted by his experiences in the trenches and by the death of his best friend, Frederick as he tries to make a new life for himself.

I picked this to read because I enjoy reading about the First World War and because it had good reviews but I found that it paled compared to other fiction that I have read about this conflict. I found it neither as emotionally compelling as some (The Absolutist by John Boyne) or as interesting in terms of the themes treated here (Regeneration by Pat Barker, Birdsong by Sebastian Faulks).
The main reason for my discontent was that the plot seemed stretched, little more than a short story’s worth of content strained by its extension to a novel. Daniel is sympathetic and interesting but not a lot happens to him, even during his flashbacks so there is little to move the plot along.
Where Dunmore does succeed is in her descriptions – both of the Cornish coast and the life in the trenches. They are vivd and really give the reader a sense of Daniel’s isolation and horror. Also the descriptions of him re-working Mary Pascoe’s land are an interesting metaphor for his attempts at starting a new life whilst also constantly reminding him of the mud in the trenches.
I also liked the analysis of class and the differences between Daniel and his much richer friend, Frederick are apt and seem realistic. The differences between them become particularly apparent when they are both in the army but in completely different roles.
Unfortunately, this couldn’t make up for the lack of action and also the I found the ending unsatisfying and a little ridiculous.

Narrative Style: First person narration, Moves between 1919 and Tristan’s memories of the war

Synopsis: Tristan Sadler has decided to deliver letters written by Will

Bancroft to his sister in Norwich. Will was shot as a coward but Tristan knows the truth of what happened and hopes to be able to tell Will’s sister his deepest secrets.

Having previously read The Boy in the Striped Pyjamas, I should have been more prepared for the onslaught on the emotions that this book provided. At the end, I was devastated. My mind kept playing over the details of the ending as if I could somehow change the narrative and give Will and Tristan a better ending.

The narrative begins with Tristan’s arrival in Norwich to give the letters to Will’s sister Marian. He had trained and fought with Will and it soon became apparent that he had loved him very much. Marian wants answers as to why Will died and proof that he was not a coward for laying down his arms and refusing to fight.

At first it seems that Tristan’s great secret is his homosexuality and the physical acts that he and Will shared. Understandably at this moment in history, and in the army, this was something that both men found difficult to deal with. However, the truth of the matter was much more painful and dark. And although I had worked out exactly what Tristan had done, that didn’t lessen the trauma of actually reading about it.

The themes of this book run through many war novels – the nature of bravery, what makes a man, the effect of brutality on the psyche – but I don’t think I have ever read a novel that tackles them so directly. Before Will lays down his arms, another character, Wolf, is murdered by the other soldiers when he finally hears that he will not have to fight. The treatment of those who wished not to fight and those who could not was appalling – much worse than I’d realised. The treatment of Marian and Will’s parents is equally deplorable.

In the end, although Tristan’s behaviour was also deplorable, I had a lot of empathy for him. Boyne’s characterisation and use of historical detail is so good that it is possible to see past the terrible act he commits and see the man and the reasons behind it. Easily the best book I’ve read in an age.

There are a lot of good things about this book. The setting is convincing – just after the first world war – and many of the characters are still recovering from it. The main character, Inspector Ian Rutledge, is himself suffering from the ongoing effects of shell shock and has the voice of a Scottish soldier, Hamish, forever criticising him inside his head. There were interesting moral dilemmas as well as an early suspect was a decorated war hero and the evidence against him came from another soldier who was in the process of drinking himself to death and the townsfolk considered him a coward due believing he was only pretending tp suffer from shell shock to avoid fighting. The attitude towards him seems appalling now but was certainly the prevalent view at the time. Indeed, Rutledge is very careful to keep the extent of his own problems a secret or else risk losing his position in Scotland Yard.

So far, so interesting and I started reading full of anticipation, expecting complications – because every reader of detective fiction knows that there is no such thing as an open and shut case – and there were plenty. And then somewhere, about halfway through, I started to get a little weary. First of all, Rutledge’s character began to seem a little unchanging. He gave nothing away and even Hamish’s comments started to lose their startling effect. Some of his conversations with witnesses or potential suspects seemed repetitive as he tried to get to the bottom of the story and no one would open up to him. Secondly, the other characters were all a little wearing. Perhaps, it was to do with the setting – the prim English village just after the first world war – but everybody was just a little careful and that got on my nerves. 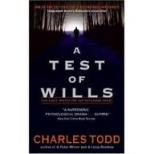 In terms of the plot, there were some very interesting twists and turns along the way, some I saw coming, some not. The idea of shell shock and its effect is played out in a number of different ways – all of which are interesting and some particularly disturbing. Indeed, the moment the reader finds out exactly who Hamish was and why he died, is one of genuine emotional power and a highpoint in the novel.

However, the ending seemed a little rushed and after all the painstaking work seemed more like luck than good judgement on Rutledge’s part. It was an interesting ending but not, from my point of view, a completely satisfying one.