Narrative Style: First person, chapters divided between past and present. 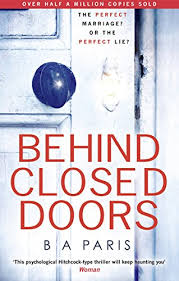 Synopsis: Grace and Jack Angel seem to have a perfect life. They are newly-weds who can barely stand to be apart from each other. Jack is a renowned lawyer who works with battered women and is chivalrous almost to a fault. However, behind closed doors, the story is completely different.

I don’t tend to read books as soon as they come out unless they are by an author I already like and even then, there are only a few I would dash out and buy straight away (Margaret Atwood and Julian Barnes are two that spring to mind). As a result, I didn’t have much of an idea who to read for this genre. I decided to look at the Goodreads awards for debut authors. Behind Closed Doors looked interesting and it had quite a lot of four and five star reviews so I decided to give it a go.

I have to say I was disappointed. Although if I’d realised that it was published by an offshoot of Harlequin, I’d have known that I wouldn’t like it. I’d also have realised that it wasn’t going to be very challenging. All of the ‘twists’ were signposted so clearly that there was very little suspense and the characters were so flat it was impossible to care whether they lived or not.

What is most troubling about this novel is the archaic sexual politics. It reminded me of an essay Iread when I was at university by Joanna Russ called ‘Someone’s trying to kill me and I think it’s my Husband‘ which is about the modern gothic, books she describes as being in the tradition of Rebecca. There is a heroine in peril with a husband who appears charming but may, in fact, be a killer. This seemed an old-fashioned trope to me and one I could not get to grips with.

Part of the problem is that there is no ambiguity. We know that Jack is evil before we even start to read. It says on the back cover that Grace is a prisoner. There is no ‘is he isn’t he’ about this. The only tension exists in wondering exactly how much of a psycho Jack is. Quite a big one, it turns out.

Still, it was hard to care. Grace has no personality of her own but is merely a foil to Jack’s great evil. I found it difficult to cope with a novel that so squarely placed man as aggressor and woman as victim. There was a little interest in seeing exactly how she would escape – because escape she would, that was equally apparent – and that was the only thing that kept me reading.