Synopsis: When Stephen Gordon was born, her father had really wanted a boy and so stuck with the masculine name. It soon becomes apparent that Stephen is not the same as other girls. She wants to be a boy, hates dresses and refuses to ride side 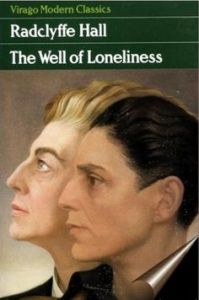 saddle. Soon she develops her first crush on a housemaid. The novel follows her through her growing realisation that she is a lesbian and into her tragic attempts at  a relationship.

Time on Shelf: About twenty years. I certainly bought this while at university although I’m not sure exactly when. I was put off by the picture of two very severe looking woman on the front which seemed to suggest that the book might be quite dry and severe.

It took me over a month to read this book. In fact, towards the end I really didn’t want to pick it up. It was only the thought that it was nearly over that spurred me on. There were a number of reasons why I found this hard going.

First of all, the writing is incredibly melodramatic. Stephen is a martyr to her desires and Hall frequently makes reference to the terrible lot of the invert. Of course, at the time this was written, that attitude made perfect sense but now it is a little bit hard to stomach.

This is particularly true at the end of the novel when Stephen heroically sacrifices her own feelings so that her lover, Mary, can be happy in the arms of a man who can give her ‘normal’ things like marriage and children. Once I realised that this would be the end, I felt incredibly annoyed that Hall refused the possibility of a happy ending for Stephen. I really didn’t want that to be the ending. Again, I think that it is an understandable impulse at the time that Hall was writing but it really did annoy me.

I found it hard to like Stephen and therefore to have sympathy for her. She seems determined that things will be as bad for her as possible. Some of the other characters in the novel are better drawn, I think, especially in the Paris section of the novel where Stephen is temporarily happy.

Hall has the annoying habit of bestowing the animals in the novel with human thoughts. Stephen is very close to her horse, Ratfery and although he obviously can’t communicate  with Stephen, Hall notes the thoughts that he has, suggesting complete understanding of Stephen’s moods. I found this intensely irritating.

Having said all that, it is easy to see why this is such an important book. It must have felt like a godsend to women reading it at the time of its publication. If it seems old fashioned in its ideas, that only shows how far we have come. The sections during the first world war and in Paris afterwards are very evocative of time and place and this was the part of the novel I enjoyed the most.