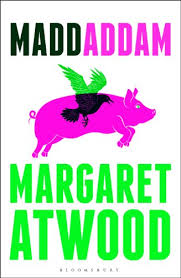 Synopsis: This picks up the story at the end of both Oryx and Crake and The Year of the Flood with the earth decimated by a man-made plague. Toby and Ren have found Amanda, currently being held by two Painballers and are contemplating their next move when Jimmy appears. The action continues from this point.

My expectations were high for this book. I had enjoyed the first two and really, I meant to read this one much earlier. I was half expecting to be disappointed. Could it possibly live up to my hopes?

Of course, this is Atwood we’re talking about. If anything this was better than The Year of the Flood. This was largely due to the Crakers being back on centre stage and Jimmy also. Although Jimmy wasn’t always an active participant, his character was inseparable from the mythology that he gives to the Crakers who treat his hat and watch as sacred objects. There is a lot of humour and also a lot of affection in Atwood’s creation of a religion for the Crakers. I particularly liked the way that they mistook the curse ‘Oh fuck’ for a cry to a deity who would come to help.

Zeb’s backstory added colour to the story of Crake and helped to explain events of the other two novels. It was enjoyable watching him switch identities and jobs, always managing to just get out of trouble. The love story between Toby and Zeb was also enjoyable. There was a refreshing lack of sentiment in their relationship. Toby was easy to identify with as she learned to put her insecurities to one side as the future of their group was much more important than any personal issues she may have.

I was a little troubled about the alliance between the humans and the pigoons at first. I wasn’t convinced that it wouldn’t just seem ridiculous but Atwood even managed to pull that off and they became more human than pig in the end.

The idea of teaching the Crakers to write and so be able to pass on their creation story to other generations was inspired. Atwood gives them childlike voices but never belittles them and their lack of guile. Perhaps this is what we would have to be like in order to actually save the current world.

The end of the novel is both sad and full of hope. There are deaths and battles but also births – babies that are half human and half Craker. The hope lies in the Crakers, their new mythology and the potential of the new species. It seems that the future is at least a little rosy.