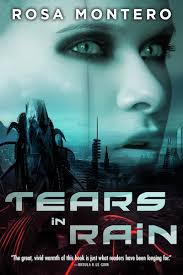 Synopsis: Bruna Husky is a technohuman or a replicant. She is also a private detective. One morning, her next door neighbour – also a rep – goes mad and attacks her before plucking out her own eye and dying herself. More stranger murders / suicides start to happen and reps become equally feared and despised. Bruna is called upon to investigate and soon finds herself involved in a conspiracy that goes right to the very top.

I was offered this as a free kindle book from Amazon when I downloaded some classic sic-fi. There was a choice of four and this seemed the most interesting. Otherwise I don’t think I’d have picked it up. I prefer my Science Fiction to be of the dystopian kind not the robots and aliens kind.

Having said that, this did have dystopian elements. There was certainly a strong moral objective about difference and equality and at first, I thought I would enjoy it more than I did. It was clearly indebted to Bladerunner, both in its choice of heroine and in its landscape but I didn’t mind that. Bladerunner is a great film and there are certainly worse things to base a novel on.

The main problem was the writing was a bit flat. I’m not sure if this is a problem with the translation or also present in the original but there was little in the way of style and the narrative was often slowed down by the leaden prose. There was the misuse of the word literally –  as in she was literally sick everywhere. Oh, I know that the OED have added this use of the word to its definition because it is so widespread but that doesn’t make it any less wrong. There were redundant sentences of the “it really had been a dreadful night” variety which just irritated me. I found that the writing distracted from what could have been a rollicking adventure.

In the end, there were few surprises. It was always obvious who the love interest would end up being, who the bad guy was and what the outcome would be. When I finished, I felt as though a good had idea had been wasted. But maybe that’s not quite what I mean. After all, Bladerunner was the good idea and there is probably no way for that to actually be bettered.