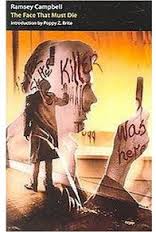 Synopsis: Horridge becomes obsessed with a face that he sees at a window. It haunts him and he comes to realise that it is the face of a killer. He knows what he has to do. that face must be destroyed.

I used to read a lot of horror when I was first at university and I think if I had read this then I would have loved it. (I’m not sure how I managed not to read any Campbell at that time. I was obsessed with Stephen King and James Herbert.) I hesitate to say my tastes have matured because that sounds snobby. Maybe it’s better to just say they have changed. I’ve read a lot of literary fiction since then and maybe that has spoiled this sort of book for me. Okay, that still sounds really snobby. I suppose what I mean is that I wish I could have enjoyed it more.

Campbell certainly gets into the mind of Horridge who is paranoid, delusional and extremely bigoted. In fact, some of his thoughts are quite hard to deal with – he is sexist, racist and homophobic. All of which fit with his delusional state of mind and are believably written. Horridge has had a tough time and no control over his life. His delusions spring from this lack of control and the way he perceives the system as helping others that he feels don’t deserve it. All of that doesn’t make it any easier to read though.

The plot moves between Horridge’s view point and that of his victims, often switching during their encounters. A good idea, I admit but every encounter followed the same pattern and so it soon became boring and made the novel seem a little clunky.

Perhaps reading this novel in 1979 would have been a lot more shocking. I was expecting it to be more horrible, more gory than it was. I enjoyed (if that is the right word) Horridge’s development as his psychosis worsened but it didn’t particularly shock or surprise me. After all, that sort of thing is ten a penny now. That isn’t the fault of this novel, of course but it did make it seem a bit jaded.