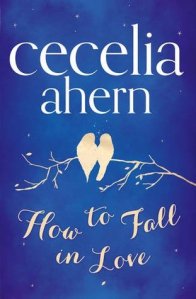 Synopsis: Christine Rose fails to stop a suicidal man from shooting himself which sends her into a tailspin of self-doubt and causes her to end her own marriage. When she sees Adam about to jump off the Ha’Penny Bridge then she knows she has to stop him.

I thought I’d get this genre out of the way early. As I have said before, I am not a fan of romantic literature. I keep hoping I will find a romance writer I will actually love but it seems it is not to be. I picked Cecelia Ahern because she has a lot of five-star reviews and I wanted to at least know what I was reading was a good example of the genre.

I have no doubt that this is the case, that Ahern is one of the better romance writers around but I still found it a chore to read. There were a number of reasons for this but the main one was there was never any doubt that Christine and Adam would end up together. Not for a moment did it seem that any of the “obstacles” in their way would actually derail the romance. There was no tension at all.

Secondly, I found the characters were all a bit like characters in a romantic movie rather than having any sort of reality. Christine was either ridiculously upbeat or a mess of tears. (This is the second novel I’ve read lately where the lead woman spends most of the time crying. Whatever happened to a strong female lead?) The other characters were just there for her to react to and had no life of their own. Adam’s turn around at the end was not convincing. It was very clearly a work of fiction. That might seem like a stupid thing to say but I felt I could never completely lose myself in Christine”s world because I didn’t believe it could exist.

However, for all my problems with the genre, this wasn’t badly written and I did want to see exactly how it would end so Ahern is clearly doing something right. I won’t be returning to read anymore though.

Exploring What Captivates, Inspires, and Intrigues Us.