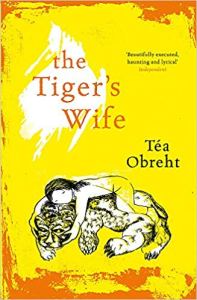 Synopsis: Natalia’s country is still recovering from many years of war. She is travelling to a neighbouring country to deliver medicine to an orphanage when she learns that her beloved grandfather has died. She recounts the stories that he has told her about the Tiger’s Wife and the Deathless Man and tries to make sense of the future, both for herself and her country.

Time on Shelf: Inherited from a relative in 2014.

I didn’t really know anything about this book – where it was set, what it was about but I liked the premise of ‘a girl who loved tigers so much she almost became one herself’ and it is a while since I have read any magic realism so I thought I’d give it a go.

This book is set in an unnamed Balkan country, an area that I must admit I know little about. Of course, I can remember the wars of the 1990s from the news but it was a long time ago and I was a lot younger at the time. So now that is yet another thing to go on my long list of things to find out more about.

The country has been devastated by the war but is now starting to try to recover. Natalia and her friend Zora are doing their bit by delivering medicine to an orphanage across the border. Near the start of this journey, Natalia discovers that her grandfather has died. She begins to tell the stories that he told her about the escaped tiger, the Tiger’s Wife and the Deathless Man.

I enjoyed the mix of myth and reality in these tales and I enjoyed fitting the details of the story together. Obreht’s writing is at its best, I think, when telling these mystical tales of death. I particularly liked the story of Darisa the Bear and how he became so good at hunting. Unfortunately, I’m not really sure what the overall point of the stories was. They seemed disjointed and removed from the modern day story. I don’t think Obreht quite managed to pull the whole thing together.

This is a novel about death and the rites that go with it, both on a personal and universal scale. Natalia is recovering from her Grandfather’s death as her country recovers from war. As such it is not an easy read and is dour in places. However, there are moments of beauty in amongst the grit.