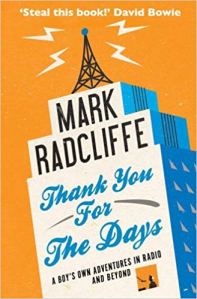 Synopsis: Radcliffe picks a series of days that have had an effect on his life, some to do with his career, some family and some just for amusement value.

Time on Shelf: Since publication in 2009.

I’ve been a fan of Mark Radcliffe since listening to Mark and Lard on Radio 1. I loved their daft sense of humour, taste in music and their northernness. One of the most annoying things about starting to teach was that I no longer got to listen to them. When I was on school holidays, inevitably it was some one else in the studio as they were also on holiday. I must admit that I don’t get the chance to listen to the radio much these days but I still catch Radcliffe when I can.

Radcliffe is an excellent raconteur and each episode was well paced and well told. Each “day” covered so much more than the event of its title and sometimes it seemed that he would never get to the point but it always turned out that the information had been important after all. There were amusing tales such as Mark and Lard drunk at An Evening with Kylie, various shenanigans with The Family Mahone and the annual radio one photograph. Radcliffe is quite self-deprecating and is quite willing to laugh at himself which made for a pleasant read.

More serious ground was covered in the chapter about John Peel’s death which reminded me how much I missed listening to his show but for the most part this is an upbeat read full of Northern humour and warmth. It almost felt like sitting down in the pub with Radcliffe and having a chinwag. It was very easy to read and easy to warm to him.

My only criticism is that you don’t really get that close to Radcliffe in any emotional way. At one stage he talks about how celebrities have personas that they put on and Radcliffe’s would seem to be humorous Northerner. Nothing really wrong with that as long as you realise that you would not be getting beyond that outer layer.