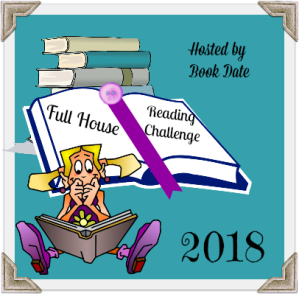 Narrative Style: Third person from the view of Winston Smith.

Synopsis: Winston Smith lives under the eye of Big Brother in a land called Oceania. Constantly observed by tele screens that look outwards as well as showing images and unable to discuss subversive ideas with anyone, Winston wonders if he is the only one who realises the issues with the regime. Before long, he meets fellow subversive Julia and they start meeting in private. This sets in action, a series of events that is unstoppable and inevitable.

I realise I am following a trend in reading 1984 but it sprang straight into my mind when I realised that I had to reread a book for this challenge. The alternatives were both equally timely – Animal Farm and The Handmaid’s Tale. However, both of those had been reread more recently than 1984.

And it was timely. With Trump’s determined manipulation of the media and his hatred of the press, the idea that “Who controls the past controls the future. Who controls the present controls the past.” felt all too real. “The best books… are those that tell you what you know already.” also seemed fitting in a time when experts are ignored in favour of unsubstantiated opinions that support what people would rather believe. Now, more than when I last read this more than twenty years ago, did the idea of the loss of the freedom even to think really resonate.

This is not a perfect book. The character of Julia was irritating and she was little more than a tool to help Winston on his journey towards thoughtcrime and his inevitable punishment. Even Winston himself is not a fully drawn, three dimensional character and felt a little flat. However, maybe it is fitting. There is little way to express personality under such a regime particularly on the surface.

Also, the inclusion of the Goldstein’s treatise halfway through slowed down the pace and was quite a dry read. However, I feel it was necessary in order to fully understand what followed during Winston’s torture and to appreciate O’Brien’s position. But these are quibbles really. The message of the novel, the cleverness of the message of Oceania’s government overrides these issues.

I had forgotten how bleak the ending is. It is absolutely devastating that what little personality that Winston has is destroyed and he is now completely unable to think a false thought. The scene where he meets Julia for one last time and they explain their betrayal of each other is particularly depressing. There is no happy ending, no obvious way to escape the regime. And it is true that the level of control exercised by the government in this novel would be impossible to overcome. Winston is merely waiting for the bullet that he knows will come. All you can think in the end is at least it hasn’t got as bad as that here.