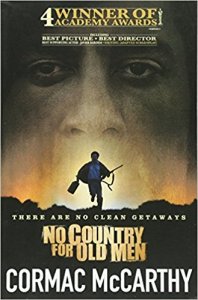 Synopsis: Llewellyn Moss’ life changes when he finds a pickup truck containing money, drugs and some dead gang members. He decides to take the money and immediately goes on the run. He has no idea how bad the chain of events he has set in motion will be.

I wasn’t really sure what to read for this genre. While I quite like a western movie, it is not a genre I have ever read – apart from Blood Meridian by Cormac McCarthy. It seemed like a good idea to read another of his novels for this challenge. While No Country for Old Men is not a traditional cowboy story it is very much a modern day version. And I’d seen the film so I was sure that I would enjoy it.

This is a dark and brutal book. The violence is well written and (like in the film) it is not glamourised. It is bleak and empty like the landscape. Chigurh is a relentless killing machine who is unstoppable and unsympathetic. He dispatches people with the same dispassionate efficiency as a farmer slaughtering his cattle. He is the only character who is completely bad and amoral and as such he is the most frightening. You definitely would not want him on your trail.

By contrast, Moss is ambiguous in his morals. He is a veteran who is a loving husband to his very young wife. When he takes the drug dealer’s money, he sets off a tense chase across the country and the bodies very quickly start to pile up. Although Moss tries to protect his wife from the aftermath of his actions, it is inevitable that she will also come under the killer’s radar.

The sheriff, Bell, feels that his country has changed and he cannot understand this kind of cold, emotionless killing. He is part of a past that is disappearing and he feels that his morality does not quite match with the murders that he is seeing. Here is a man who loses money running the jail because he wants to make sure his prisoners are well fed. It is inevitable such intellectually cold killings as Chigurh’s would be impossible for him to understand.

McCarthy’s minimalist style seems the logical successor to writers such as Chandler and Hammett. This is a gangster story as much as it is a western. It is violent and cold in places but the contrast of Bell’s homespun philosophies and his quietly romantic relationship with his wife suggest that maybe the future isn’t totally bleak.