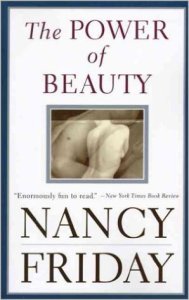 Synopsis: Friday analyses the way beauty effects female lives. She uses psychoanalysis to investigate events early in her own life that she feels have held her – and all women – back. She uses anecdote and fictional examples to support her ideas.

This book was a slog. I very nearly didn’t finish it. (It took me a month to read it, I was that irritated with it and it has gone straight on the charity pile.) The main problem is Friday’s tone. She sounds hard done by – especially in the early chapters. She blames a lot of her issues on problems with her early childhood. Her father abandoned their family and she felt her mother loved her sister more as she was prettier. This lack of loving gaze meant that Friday was lacking in confidence about her looks. This seems disingenuous when you look at the author picture and Friday is indeed a beautiful woman. She later says that by the time her looks came in, it was too late for her to believe that she was beautiful. She uses psychoanalysis to help her understand how her formative years were so important in making her the person she is. To a certain extent this is fine. I am happy to agree that psychoanalysis is a useful therapeutic tool but Friday takes this one step further. She then extrapolates from her personal experience to all women lacking the gaze from their mothers. My own experience of childhood was completely different from Friday’s. My father was very much involved in childrearing and my mother worked because she had to. How can Friday assume that my issues will be the same as hers?

Friday does seem to see all women as being the same as her. That is white, privileged, straight and American. She sees gender as the only issue affecting women and men. (And men are masculine and women are feminine in this little world.) All of the examples she gives are from the business world or from friends who are writers and artists. Hardly representative of the whole human race. Which is also fine but if you are going to talk about all women, perhaps you should think about what that really means.

At one point, Friday talks about sexual harassment in the office. Instead of blaming men, she says, we ought to think about how women have changed the atmosphere of the office by coming in to work dressed sexually and making it hard for men to understand the new rules of the office. There may be some truth to this. Undoubtedly more women being in the office has changed the dynamic between men and women but lets not let men completely off the hook. Harassment suggested a sustained campaign. Sexy clothes are no excuse for that sort of behaviour.

Similarly, when Friday talks about the media and its affect on women’s perception of beauty, she seems to let the media off the hook as well. She says that women aren’t so easily brainwashed. Well, true, women can think for themselves but there is also no doubt that the media influences how we feel about and see beauty around us. How Friday can discuss beauty for older women and not challenge the way beauty is seen in the media as a youthful characteristic, I do not know. Again, she puts the blame squarely at the feet of other women without stopping to think about what may make women act in this way.

Rightly, Friday says that we shouldn’t blame men for all of our ills. I remember being thoroughly depressed by some of the authors she mentions – Dworkin and McKinnon, for example. But instead of suggesting that patriarchy affects all of us, she goes on instead to blame other women. This is no more helpful that saying all men are evil. It is finding just another scapegoat instead of actually challenging any of patriarchy’s expectations.

Overall, I was disappointed with how personal this book was. I enjoy reading about others’ experiences, however, this was not an autobiography, this was supposed to be about men, women and beauty. Really it is just about Nancy Friday.