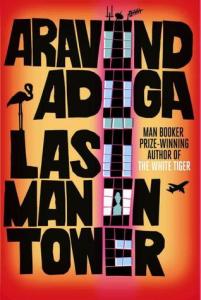 Synopsis: When they are offered a large amount of money to leave their flats, most of the residents jump at the chance. However, a small number – for various reasons – do not want to leave. They are not interested in the money, at least at first. The developer is a very determined man and he quickly discovers their weaknesses and exploits them. Soon there is just one man left who will not back down.

I loved The White Tiger and, although, it was probably unfair to do so, I was judging Last Man in Tower by that standard and unfortunately it didn’t quite live up to it.

This is a novel about greed. The residents of Tower A and Tower B can barely imagine the amount of money offered to them by charismatic developer Dharmen Shar. It would mean a new life for all of them. Happily, they jump at the chance without considering the ethics of the situation. I was with them – at least at first. We’d all love such an opportunity, I’m sure.

At first, there are four who refuse. Mrs Rego, social worker and possible communist, elderly couple, the Pintos who are worried that Mrs Pinto will not be able to find her way around a new building as she is blind but used to her surroundings and Masterji, a former school teacher who opposes the redevelopment on moral grounds and also emotional ones as his memories of his dead wife and daughter are all in the building.

Eventually, after fair means and foul, they all fall by the wayside and accept an offer apart from Masterji. They cannot move forward unless all residents agree to the redevelopment and Masterji keeps on stubbornly refusing. A noble man, you might think but Adiga doesn’t make it as simple as that. It is almost impossible to be completely on Masterji’s side. Just as it is impossible to sympathise with his neighbours. Especially as they begin to get meaner and meaner in their desperation.

Amiga does show what desperation can do to a person. All the residents can see the money slipping through their fingers and it makes them insane. Shar doesn’t even have to do most of the dirty work himself. They are more than happy to turn on Masterji themselves. The strength of the novel is that, even at the very end, it is easy to believe in the actions of the residents. I never doubted for a moment that seemingly decent people would resort to violence and psychological torture in order to get what they wanted.

There were two things I found problematic. First of all, there are a lot of characters in this book. I found it difficult to remember who was who and where they stood in relation to events. The second was the pace. The first half of this book is very slow. Once Masterji has become the universal enemy of the rest of the tower then things heat up a bit and the end of the novel is much better paced but I very nearly didn’t get that far.