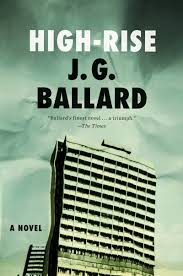 Synopsis: Robert Laing quickly spots the careful class demarcations when he moves into the high-rise. Whilst ostensibly for the rich, it quickly becomes apparent that some are not as rich as others. These demarcations follow the floors with the lowest on floors one to ten and so on. When the electric start to fail, panic and violence quickly ensue. Before long, everyone has returned to a savage state and society has completely broken down.

This has what is perhaps my favourite opening line ever – “Later, as he sat on his balcony eating the dog, Dr. Robert Laing reflected on the unusual events that had taken place within this huge apartment building during the previous three months.” This raised my expectations quite highly. The plot then moves through those three months. Unfortunately they don’t quite live up to this powerful opening line.

The story is told from the perspective of three men – one from the lowest ranks, Wilder; one from the middle, Laing; and one from the top, Royal who is one of the architects of the high-rise. Before civilisation starts to break down, there are already petty jealousies and rivalries about who can use which swimming pool and which lift. This seemed realistic enough and it was easy to see how such grudges might escalate into something bigger.

However, I wasn’t convinced by the triggers for the escalation. Very quickly, it seemed, people were no longer leaving the high-rise and hunting in packs for people from the other floors. Once that had happened, there were very few places for the narrative to go. Nothing else really happened and it felt like events levelled out. They didn’t really get any worse and there was clearly no way for them to get better.

That wasn’t the only problem. I couldn’t really decide what point Ballard was trying to make. I suppose that the high-rise was meant to represent a microcosm of society with the three levels representing upper, middle and working class but because these were all from the same class, the point didn’t quite work. At the end. only Laing is left eating his barbecued dog suggesting perhaps that the middle classes are the ones that will survive and then because they wait it out passively. I’m not sure what sort of moral lesson that is supposed to be.

This is as much about masculinity as it is about class and the three men show different ways of being male. Wilder, as his name might suggest, is very much ruled by his sexuality, Laing is more refined, preferring to wait and see what happens and finally Royal is a leader, at least for a while, by virtue of his money and his penthouse apartment. This also relates to stereotypical versions of masculinity and class e.g. the beastlike working class male. The women in this novel are underdeveloped, there to largely be raped or rescued depending on the man in question. That also was disappointing.

Ultimately this was an interesting idea which was well-written but just didn’t quite work for me. This is the second Ballard I’ve read lately that has left me a little cold but I’m sure I will be tempted again as the initial ideas just sound so interesting. They have made a film of this, to be released next year and it maybe that it will work a little better as a film. I’d certainly be keen to see what they do with the material.