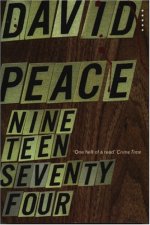 Synopsis: Ed Dunford is back in Yorkshire with his dream job as a crime correspondent. He begins investigating the horrible death of a little girl and finds himself mired in corruption and violence until he barely knows what is right and what is wrong.

This book really isn’t for the fainthearted. It is brutal and violent almost from the very first. Ed is thrown into a world he thinks he understands but that really is beyond his very worst imaginings. No one is to be trusted and in the end, Ed feels he has to become like the men he is trying to stop because they are outside of the normal rules of law and order.

Pearce has a lot in common with hard-boiled American writers such as James Ellroy. None of the characters are pleasant, they all double-cross each other. Ed – supposedly the good guy – is just as misogynistic and unpleasant as the rest of them. I have seen complaints about the amount of violence against the female characters in this book and it is true that very few survive the length of the book and those that do are still effected by male violence. However, I feel that given the subject matter of the book and the setting in the seventies, this is to be expected. This is a book about male violence and its consequences. It would seem unrealistic for this violence not to be against women. That said, I’m not sure that Ed needed to be quite so unpleasant towards the women in his life, forcing on into having an abortion, forcing another into anal sex. To me, this was superfluous, an unnecessary addition to the already high levels of misogyny. It added nothing to Ed’s character development.

The narrative voice was convincing throughout – especially as Ed started to unravel. It was interesting to have a hard-boiled novel set in Yorkshire and to have a narrative voice that was so very northern. The pace was perfectly judged with things happening so quickly towards the end it was hard to keep track and no wonder that Ed could barely keep up. I will certainly be reading the next installment.