Until recently the most obvious answer to this question would have been Ian Rankin’s Inspector Rebus series. John Rebus is my favourite fictional detective because he is difficult, exasperating and above all anti-authority. His moral code is highly personal which ensures that he does not play by the rules much to the annoyance of his superiors and the entert 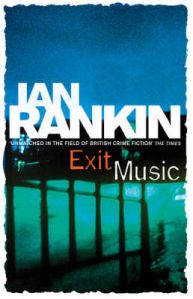 ainment of the reader. Even more importantly, he had excellent taste in music and Rankin litters the books with musical references as should be apparent by some of the titles – Dead Souls, The Hanging Garden, Let it Bleed, Black and Blue and, of course, Exit Music. And then there is the fantastic Edinburgh and Fife locations, so evocative that they seem like a character in themselves.
In what was the final book of the series, Exit Music, Rebus retired. I admit, even at the time of reading, this seemed unsatisfactory. Rebus is one of those people who would be lost on retirement, who die three weeks after or turn up at work more often than when he worked there. It may that Rankin agreed with this as there is now a new book, Standing in Another Man’s Grave which I am yet to read. It may be that it was always the case that another book would be written. The ending of Exit Music is open to a continuation of the story. It matters not. I am certainly looking forward to reading about the next stage in rebus’ life.
I haven’t read that many other series. Harry Potter, I feel ended when it should. The only way to continue that would be with the next generation of Weasleys and Potters. An adult Harry Potter just wouldn’t be the same. Similarly, His Dark Materials had a pleasing ending and a completely new scenario would have to be invented in order for Lyra to have an new adventure. I love the Game of Thrones series but as yet they do not look like finishing.

Roaming the Library One Book at a Time