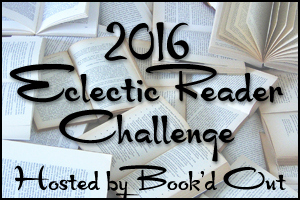 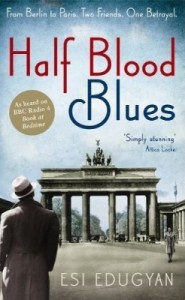 Synopsis: In 1940, rising jazz star Hiero Falk is picked up by nazi soldiers in Paris. No one is sure what happened to him after that but he is presumed dead. In 1992, a documentary is made about him that brings Hiero’s friends and bandmates Chip and Sid back to Berlin. Sid was the only witness on the day Hiero disappeared and he finds memories coming back to him that he had thought long buried.

Edugyan’s novel is written from Sid’s point of view and in his voice which gives the prose an almost jazz like rhythm. It was very easy to read and also gave a clear picture of what Sid was like.

At the beginning of the novel, he and Chip are preparing for a trip to Berlin for an airing of a documentary about Falk and the record they made called Half Blood Blues. Sid is clearly reluctant. Even more so when Chip announces that he has been contacted by Falk who is not dead but living in Poland and he intends to go to see him. It is clear what Sid has secrets and memories that he does not want to face. Nevertheless, he goes with Chip to Berlin.

The story shifts easily between the present day (1992) and 1939-40 in first Berlin and then Paris. Sid is a bit of a nervous character and his fear and worries give the reader a good impression of what it must have been like to be black at that point in history. It was an angle I hadn’t really considered and it certainly made me want to find out more it.

Sid and Chip are both scarred by their experiences, as is Hiero when they finally meet up with him. The revelation of what Sid has done is shocking and his final confession to Hiero is touching. I felt that the novel ended a little awkwardly and it could have been taken a little further. As it was, it just stopped suddenly, leaving a lot of questions unanswered.

Overall, this was a very enjoyable story which gave an unusual (to me anyway) perspective on the second world war.

Narrative Style: Third Person from the point of view of two women

Synopsis: Mariam is fifteen years old when she is married off by her father to the much older, Rasheed. Laila is born to a different generation but also finds herself  married to Rasheed, The women form a bond that helps them to survive not only the horrors of their marriage but the war and oppression all around them.

Time on Shelf: About five years. I suspected that this might be a bit of a bleak read and so put off reading it.

This is a compelling book. The story of Afghanistan from the seventies until the present day told through the eyes of two women trapped by war and marriage. The history was something I was sort of familiar with – it became more familiar as it came closer to the present day – but nothing prepared me for reading about the horror of life for actual citizens.

Hosseini creates a vivid picture of the various stages of war and the various enemies. He shows how men like Rasheed used the rise of the Taliban and the oppression of women to commit their own personal atrocities. Rasheed was already determined to control the women he was married to – it must have seemed like a gift from heaven that women were not even allowed out without a male escort. He was a brutal man and the regime legitimised his brutality and meant that Mariam and Laila had no escape.

Both women as portrayed convincingly as they battle against the many hardships the war throws at them. I’m not sure I was 100% convinced by Mariam’s eventual self sacrifice but maybe it was only because I wanted it to be otherwise. I wanted her to be able to share in the future with Laila and Tariq.

This is a bleak story and it was such a relief at the end that things did start to pick up for Laila and her family.  I’m not sure I could have coped with much more heartache. As with the best of fiction, this gave me insight into a situation that I didn’t know much about and has encouraged me to read more about this subject.

Narrative Style: First person narration, Moves between 1919 and Tristan’s memories of the war

Synopsis: Tristan Sadler has decided to deliver letters written by Will

Bancroft to his sister in Norwich. Will was shot as a coward but Tristan knows the truth of what happened and hopes to be able to tell Will’s sister his deepest secrets.

Having previously read The Boy in the Striped Pyjamas, I should have been more prepared for the onslaught on the emotions that this book provided. At the end, I was devastated. My mind kept playing over the details of the ending as if I could somehow change the narrative and give Will and Tristan a better ending.

The narrative begins with Tristan’s arrival in Norwich to give the letters to Will’s sister Marian. He had trained and fought with Will and it soon became apparent that he had loved him very much. Marian wants answers as to why Will died and proof that he was not a coward for laying down his arms and refusing to fight.

At first it seems that Tristan’s great secret is his homosexuality and the physical acts that he and Will shared. Understandably at this moment in history, and in the army, this was something that both men found difficult to deal with. However, the truth of the matter was much more painful and dark. And although I had worked out exactly what Tristan had done, that didn’t lessen the trauma of actually reading about it.

The themes of this book run through many war novels – the nature of bravery, what makes a man, the effect of brutality on the psyche – but I don’t think I have ever read a novel that tackles them so directly. Before Will lays down his arms, another character, Wolf, is murdered by the other soldiers when he finally hears that he will not have to fight. The treatment of those who wished not to fight and those who could not was appalling – much worse than I’d realised. The treatment of Marian and Will’s parents is equally deplorable.

In the end, although Tristan’s behaviour was also deplorable, I had a lot of empathy for him. Boyne’s characterisation and use of historical detail is so good that it is possible to see past the terrible act he commits and see the man and the reasons behind it. Easily the best book I’ve read in an age.

My favourite gift this year was a book called 642 Things to Write About which is full of writing prompts. I could barely wait for guests to leave before I started to write in it.

As I am always looking for things to write in this blog, I shall share what I write. I’m not going to promise to do it everyday as once I am back at work, that will be impossible but I will try to do it regularly.

Here is the first one:

Write a scene that begins “It was the first time I killed a man.”

It was the first time I had killed a man. But not the last.

It didn’t feel as bad as I might have supposed. The distance was the thing. It was the bullet rather than the knife so I didn’t have to witness it eye to eye, as it were. There was no hot blood oozing over my hands. I saw his body drop though, all heavy like lead. Straight for the floor. Like a giant hand had cut all his strings. The wound was to the head so death was probably instant. If not, it would surely have been quick.

Of course, he was one of the bad guys. That was what the Government said. So his death didn’t really trouble me. No more than shooting a rat might have. Vermin. Better off dead. And of more use.

Now that the Fuel Wars are over and the Government has retained supreme control, it is hard for the young ones to imagine what it was like. The fear we had then was all-consuming. And then there was the cold. That sneaks up sometimes. I’ll wake in the morning and the toes are outside the quilt and they are like ice and I get transported back there. To huddling together with all the people in your building. To having nothing to sit on, nothing to read, nothing at all because it had all been burned. And the thought, what would happen when everything had been burned.

That had been my reason for going to fight for the Government rather than the rebels. The Government gave you a thermal uniform. You got gloves, socks and regular meals. All the rebels could give you was a sense of moral superiority and that does not really keep you warm.

I admit I don’t think often of those who died, whether by my hand or one of my fellow soldiers. I think, instead, of how warm it is now.

Roaming the Library One Book at a Time