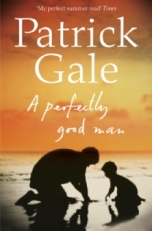 Synopsis: Lenny decides to take his own life after being paralyzed in a rugby accident. He asks the parish priest, Barnaby Johnson to be present. His decision and Barney’s involvement will turn the parish upside down and bring old secrets to light.

This had me hooked from the first with Lenny’s meticulous plans for suicide and his request for the parish priest to be present. Barnaby has no idea what is going to happen until it is far too late and Lenny has already committed the act. He is left with nothing but prayer.

The story then unfolds from various characters points of view at various points in their life so we learn of Barnaby’s marriage, his difficult relationship with his adopted son and his affair with a local artist from his point of view and theirs. We learn about Lenny’s mother and a local parishioner named Modest who turns out to play a crucial role in events a number of times in the narrative without always realising.

The pace is unhurried and it is easy to work out some of the secrets but that really isn’t the point of this story. The narrative is as much about Barnaby’s difficult relationship with his faith and with God as it is about the actual events. It is about family and the ways we come to find love in the most unexpected ways. There are no big twists and turns because this is a novel about ordinary people dealing with what life throws at them.

The characters were convincing and I felt able to empathise with most of them even those I didn’t actually like. Even Modest, the most horrible character, was pathetic rather than anything else. It was interesting to see both sides of the father son relationship between Barnaby and his son, Phuc and realise exactly how hard it is sometimes to do the right thing.

The book ends well, in that it ties up loose ends and it is generally a happy ending but there is nothing forced or unlikely about it and no doubt if you continued to follow these characters life would continue to throw challenges at them but this was where this particular story ended.