Narrative Style: First person, flashback framed at both ends by the present day.

Synopsis: A middle aged man returns to his childhood home after a funeral.  He ventures to the house down the lane and remembers long forgotten and sinister events from his childhood.

The nameless narrator of this novel returns to the place where his childhood home used to be. Seemingly compelled to investigate, he starts down the lane to see if the farm and the “ocean” that used to be there still exist. Once there, he sits down by the pond and begins to remember Lettie Hempstock, the little girl who used to say that the pond was an ocean.

With memories of Lettie, come memories of a chilling nature. Events start with the suicide of a man who has stolen money from his friends. This awakens a supernatural force which tries to give money to people. One of the most creepy parts of this book is when the nameless narrator wakes from a dream in which he is choking to discover he really has got a coin stuck in his throat. This really touched on one of my deeper fears.

Events quickly take a fantastical turn, with monsters in human form and creatures from a realm beyond our understanding. The governess Ursula Monkton enthrals all except the narrator who sees her as the personification of evil especially as she seems to have a strong hold over his father. The narrator’s perception of her as a monster is like a child’s explanation of adult events that are beyond his understanding and the forgetting of these events as the child ages.

The darkness in this story – personified by Ursula Monkton and the Hunger Birds – is pretty unsettling especially when the Hunger Birds start to eat away at the universe. But the images of friendship and sacrifice – personified by the Hempstock family – are equally powerful. I liked the idea that the universe is being protected from the worse of evil by three generations of strong women.

Perhaps because this was the story of a young boy who didn’t entirely understand events all of the time anyway, there is never any room for disbelief. The story was utterly convincing. It transpires that the man has visited the farm a few times in his adult life although he cannot remember doing so. By the time he leaves the farmhouse, the reader realises that he will not remember this visit either. This made me think of the way that difficult childhood memories can have such a powerful hold even if you cannot remember them fully.

Reading this was a little like reading a modern fairy tale. You could take it at face value, a scary story about death, friendship and sacrifice or you could look at it as an allegory about good and evil, childhood and growing up. Like the pond, that was really an ocean, this is a novel with unexpected depth.

Synopsis: Due to the absence of Dream from his realm, some of the dreams and nightmares have escaped. This leads to all sorts of bloody mayhem. Add in the presence of a Vortex that could wreck the dream world forever and you have the makings of an exciting story.

As I mentioned in my last post I was going straight on to read the next Sandman book The Doll’s House. I was glad to have been loaned the second one as well as otherwise I would have felt a little bereft. I’m pleased to say that I was not disappointed.

Having said that, this is much less a story about Dream – obviously he appears in it but he isn’t the centre as much as he was in the first book. Instead, Rose, granddaughter of Unity Kinkaid (a character from the first book) is the focus and her search for her younger brother supplies most of the narrative momentum.

One the way she meets a whole host of wacky and wicked characters. There seems to be no limits to Gaiman’s imagination in this respect. And while they are strange, they are never less than convincing. Such is the level of his talent.

There is plenty of gore, as well and the illustrations are just as impressive and vivid – in fact more so, as the story allows for an unleashing of the artists twisted imagination much more than in the first book.

I felt this book was more compact and self-contained than the first and I don’t feel such a compulsion to read on immediately. Having said that I am much more interested in reading the rest of them now.

Synopsis: Crowley like magician, Burgess tries to summon Death, in order to live forever. Instead he gets Dream (or Morpheus or The Sandman). He keeps him prisoner and steals items from him. Eventually, those guarding Dream make the mistake of falling asleep and he escapes, aiming to wreak vengence on those who imprisoned him and to get back the things that belong to them.

When this genre came up, I knew immediately that I would read one of The Sandman books. I had read a couple of the comic books a long time ago – from the middle of the series but the nature of these stories means they can be read out of sync. I thought it would be nice to see if they stood up to the test of time. I also knew that Gaiman’s subject matter would be pleasing to me and I hoped to enjoy this as much as other things that he has written. So I asked a friend who is a big fan to loan me the first book.

Preludes and Nocturnes was definitely a page turner. I read it quickly and not just because obviously the words per page are less than in a novel. I wanted to know about Dream’s revenge and how he would regain the tools of his trade. The action did not disappoint – from duels with demons in hell to the spectacular nightmares unleashed on the world by John Dee- and I was often surprised at the turn that events took. At the end of the book, I wanted to read on straightaway – which was okay because I have been loaned a copy of the next book as well. I have an awful feeling I’m going to end up buying the rest.

The character of Dream is not really what I would have expected from the character of The Sandman. my impressions of The Sandman before reading any of this series was much more whimsical. I’m sure I’m not alone in having quite a dreamy, sweet picture of the man who brings you dreams at night. Of course, this discounts the idea of nightmares completely. In fact, few dreams are ever straightforwardly lovely – at least in my experience. It makes sense then that Dream should be a harder, more difficult character. And he is one of the Endless along with Death and Desire and that gives him an isolation from the humans whose dreams he crafts. There is something attractive about Dream – perhaps this is as it should be – even though he is not a nice person if that is even an appropriate thing to say about an anthropomorphic personification.

The illustrations are amazing. Vivid and nightmarish, they make the story come alive for the reader. The use of colour is often jarring as if to ensure that this is recognised as being a fantasy world. They are the perfect way to capture the ideas in Gaiman’s imagination.

If there is anything to complain of here, for me, it is the fact that their is less work for my imagination to do. Imagine the prose that would describe some of these drawings. It would be truly amazing to read. That said, there is nothing intellectually lacking about these stories. They stand up to rigourous scrutiny along with the best of fiction. Much recommended.

When I am feeling a bit low, I tend to look for reading that is either going to make me laugh or that is going to be nicely tied up at the end. There are two things that I periodically turn when I am in this mood – one of the many Discworld books, guaranteed  to lift your spirits or detective fiction of some description which would give me a puzzle to solve and hopefully leave me with the correct answer.

The next task for me was to decide which Discworld book to talk about. This was stupidly difficult. As far as I am concerned, they are all good so it wasn’t even a question of eliminating the ones that were bad. Eventually, it came down to favourite characters – and that came down to Death. Of the 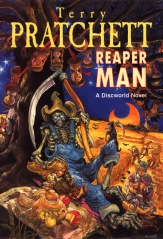 books which feature Death as a main character, Reaper Man is my favourite. In this, Death goes miss and lives as a human called Bill Door. Appropriately, he becomes a reaper of corn. There is a wonderful scene where he becomes aware of the nature of time, something he has never had to worry about before. He cannot imagine how humans manage to live with clocks in their houses, quietly ticking off the seconds of their all too brief (from the point of view of an immortal) lives. As Death is no longer doing his job, life force starts to build up and Ankh-Morpork becomes home to a number of undead – vampires, zombies and old wizards who fail to die when they are supposed to – all of which add to the humour.

This is a novel that manages to be both comic and profound. It tackles big ideas without them seeming big or pretentious. It makes you think about life and death without being the least bit depressing.

The other type of novel I like when I feel a bit under the weather is detective fiction. Although I have read Rendell, Kellerman, Patterson and others, I find that Ian Rankin’s Rebus just resonates the most with me. My favourite

Rebus Novel is A Question of Blood. The murder takes place in a school; a shooting by a loner who then kills himself. I like this because it appears an open and shut case but, of course, it isn’t. As ever, Rebus’ personal life gets him into trouble and is as much a concern as the case he is working on when it seems he may have committed a crime in order to help DS Siobhan Clarke.

I try not to read books that I have read before especially when there are so many books waiting patiently on my to-read list but there are times when it is comforting to know exactly what you are going to get. And both Pratchett and Rankin never let you down.