I don’t want to sound hard-hearted but I’m not really given to crying when I read. It’s at least partly because I don’t read the right sort of fiction – or what I imagine is the right sort of fiction. Jodi Picoult for example, I imagine from the subject matter of her books would probably move me to tears. As I have already noted, I am not really romantic so those sort of stories pass me by. So it took me a little while to decide what I was going to write about. 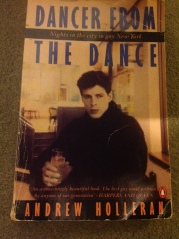 books that can have you laughing one minute and crying the next. Set in the New York Gay Scene in the 1970s, it is about one man’s search for some sort of meaning and some version of love in amongst the superficiality. Holleran brings the scene to life vividly. All of the characters are memorable, even if they only swim into the limelight briefly. In amongst all the chaos of the scene is Malone, exquisitely beautiful and extremely lonely. He seems untouched by everything while so desperately wanting to feel something.

His friendship with the superbly catty queen Sutherland is at the centre of the novel and the reader becomes close to the both of them. It is this that renders the ending so very tragic and is so upsetting, Holleran frames the novel with letters from a friend who has left the scene and the details of the lives that have continued contained in these letters save the book from being too tragic and instead leave the reader with a more hopeful feeling.

My second choice is The Book Thief by Markus Zusak which is set in Germany in the second world war and is narrated by Death. I’m not sure what it was that was so devastating about this book. I have read other books

with similar subject matter (Schindler’s Ark, The Boy in the Striped Pyjamas, The Pianist, for example) without getting upset.

Perhaps it is the idea of Death watching us and narrating. The tone is strangely distant from the events that it sees. There are tragedies in this book and they are upsetting but the moment in this book that finally made me cry is a happy one. it is a hopeful moment that speaks of true friendship. And it is a relief.