I wanted to read something a bit different for translated literature for the Eclectic Reader Challenge and this had been on my to read list for a while. I’ve read De Sade before (although a long time ago) and I thought it would be interesting to read the author who had given his name to the opposite end of the spectrum to De Sade. I can’t help wondering how you would feel having such a thing named after you (in case you don’t know, the term masochism comes from Masoch’s name). Do you suppose he knew, did it happen in his lifetime? How would friends and family react to that?

The book itself was not really what I was expecting. It is not particularly explicit and the protagonist’s Severin’s beatings are not particularly graphic. That said, this was published in 1870 and was considered shocking at the time, particularly, I think due to the idea of female dominance and cruelty and Severin’s willingness to submit to it. 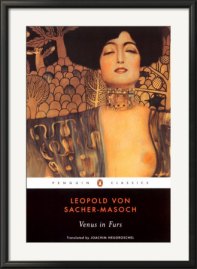 There are some parallel’s with Fifty Shades of Grey (although this is considerably better written). Severin is in love with his venus, Wanda and adores her so much that he is willing to submit to her every whim and become a slave. They sign a contract outlining the exact nature of their relationship. Interestingly, it is Wanda who seems to have the most misgivings – at least at the beginning. Severin is more than willing to be her slave.

Unfortunately for Severin, Wanda becomes infatuated with another stronger man (in a particular stroke of cruelty, she allows him to beat Severin, marking the very end of their relationship).  It seems that being allowed to be so cruel has killed any love she had at the beginning of the novel.  She finds that she wishes to submit to her new lover whom she loves with a greater passion.

Is this suggesting that this willingness to submit is a part of love, something that is present in all of us but which shouldn’t be acted on? Certainly, I like the way that roles seem more fluid in this book than in Fifty Shades of Grey and also unlike between Christian and Anastasia, it is Severin who wishes to submit who asks for Wanda to fulfil his dreams and Wanda, the dominant one, who has to be persuaded. This certainly made me less uncomfortable than the sexual politics in Fifty Shades.

This wasn’t a great read – it wasn’t terrible either – but in terms of historical interest and cultural significance, I’m glad to have read it at last.