At the end of last week, I went to see Django Unchained and I have to say that I  loved it. Well, I love Tarantino, the extreme violence, the superb dialogue and the non-linear chronological structures all appeal. So much so that I was quite excited to go and I was not disappointed.

As with all good westerns, retribution was the main theme of Django Unchained. And retribution of a slave against his masters, was a revenge that the viewer could really get behind. Particularly, I thought, at the end when the toadying slave played by Samuel L Jackson got his comeuppance. That was a particularly satisfying moment.

Also, as with all westerns, even the good guys were really bad guys. Django himself has to go through hell to get his freedom and along the way commit acts of atrocious violence. King Schultz, whilst nominally on the side of good, and who helps Django with his scheme, is a bounty hunter who is willing to shoot a man in front of his son if it means he gets his money. This version of history shows us that no one escaped the depravity of slavery – whether it warped the mind of the slave owners or destroyed the slaves, both physically and mentally, it’s brutality was all encompassing. In this sense, the level of violence seemed apt to show the horror of such a system

Tarantino has been criticised for taking on the subject of slavery. Spike Lee, for example, has suggested that he finds the film – or rather the idea of the film, as he doesn’t feel obliged to see it before he passes judgement on it – offensive. Lee makes a number of assumptions in doing this, one of which 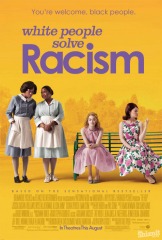 seems to be that the only people who are allowed to write about slavery are its victims. There is no doubting that this is a white man’s story about racism but that does not immediately mean that it will be racist. Of course, Tarantino is irreverent. Of course, the violence tends  towards the cartoonish. Perhaps these things do not fit with Lee’s views of what a film about slavery should be about but for me it was far less offensive than a film like The Help which was packed with racial stereotypes. Nevermind the idea of the charismatic white woman who saves the day. (see the following link for more re-created movie posters at ww.theshiznit.com.)

Finally, the main reason I like this film is the same reason that I like Inglourious Basterds. Tarantino seems  to be using his films as a sort of cinematic wish fulfilment, a cinematic version of the idea of if you had a time machine, what would you change. At the end of Inglourious Basterds, Hitler is absolutely obliterated. The explosion at the end of Django Unchained performs a similar function on history. It blows up the house and all in it and as Django and Broomhilda ride away from it, it is the very idea of slavery that is blown sky high. All the horrors of the system, Jackson’s house slave, the man who nearly cut off Django’s gentals, all of Candie’s warped acolytes, they all go up in flames. Apart from Django and Broomhilda, only two seemingly innocent female slaves are allowed to escape. The final explosion is cathartic, releasing Django from his past and allowing him to finally, actually be free.