Read for the Eclectic Reader Challenge.

I really wanted to love this book. I’ve read Eco before – The Name of the Rose and Foucault’s Pendulum – and really enjoyed his work. I was expecting to feel the same about this book.

I’m not even really sure what I found less enjoyable about it. It certainly isn’t as densely written as Foucault’s Pendulum and it covers some of the same sort of ground – conspiracies, fakes, the Masons – I just couldn’t get excited about it. In fact, at one point I was ready to abandon it altogether. I hate to not finish a book and besides I’d already said I would review it for this challenge. So I plodded onwards.

In actual fact, about half way through, the narrative suddenly caught 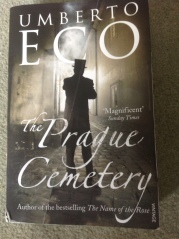 me and I was intrigued to see where it would all end up. In terms of historical accuracy, Eco claims that all the events and characters existed in real life which is a little unnerving as this book is about anti-semitism and the faking of documents that suggested a Jewish global conspiracy that is said to have influenced Hitler. That gave the book a rather disturbing air.

One of the more convincing elements of this book was the description of the mind of Simonini, a man full of hatred and who was willing to kill anyone who got in the way of his grand plans. He becomes so disturbed that he actually takes on the persona of one of the many people that he kills. He was very effectively written and genuinely unsettling.

Ultimately, I think that I would have enjoyed this book more if it had started about halfway through and avoided all the detail about Garibaldi. And then perhaps it could have continued a bit longer as I felt I was just beginning to enjoy it when it actually ended.